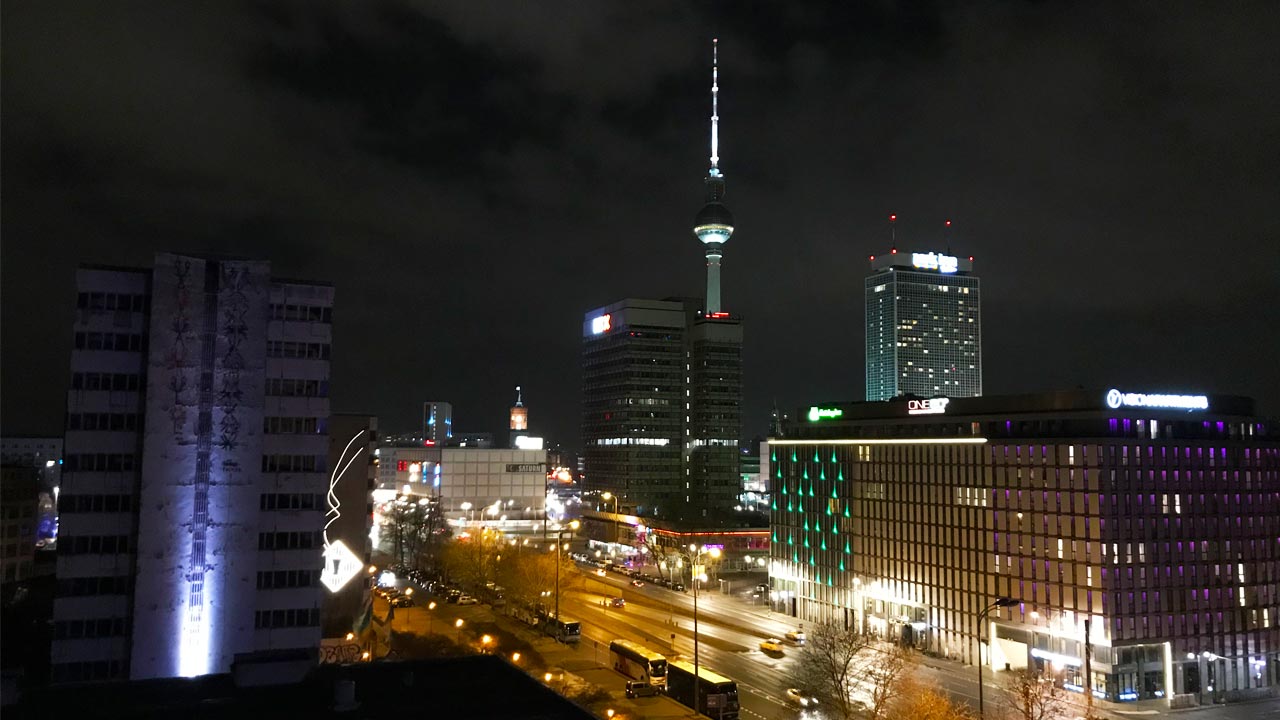 It had been almost four years since I had last left the UK; practically a lifetime for someone who enjoys exploring! I had very itchy feet. A couple of people had said Berlin was worth a visit, and that was my sole reason for choosing to visit. I have always acted on impulse without need of much research. I nabbed a cheap flight, grabbed my rucksack, and a couple of hundred Euros.

At Schönefeld airport, I jumped on a train directly outside the terminal. Cost, just €3. Arriving at Alexanderplatz—the very centre of Berlin—I immediately felt at ease. I have visited many cities and the feeling on arrival is often of claustrophobia and frenzied activity. Berlin was chilled, efficient, even restful. I watched trams glide smoothly across the vast plaza and was deeply satisfied by my first impression.

The trope about Germans not crossing the road until the light turns green is indisputable fact. Even with no traffic in sight, I too found myself obeying this rule without question. The choice of deploying my own judgement as to whether to cross the road or not had been withdrawn; and it felt quite liberating. I warmed to the iconography on Berlin’s crossing lights. In Berlin, the ‘green man’ is a rotund gent wearing a large hat. He is the Ampelmann and he strides forward with a sense of purpose. He is a relic of communist East Germany. Following the fall of the Berlin Wall there was a move to standardise and replace him with bland Western-style crossing signals. He was rescued by local artists, reinstated, and he went on to become a cherished mascot of the city.

On the agenda for the first evening was to find somewhere for a pint. You might have deduced; this isn’t going to be a highbrow critique of Michelin dining. Lemke Brauhaus is a modern brewery and restaurant located right next to Alexanderplatz. It is bloody good. If you are unsure what to drink, just get the tasting selection: Six 100ml beers for €10, served with tasting notes. I was red-faced and giggling by the sixth. After all, your Berlin city break would not be complete without sampling German beers!

Mutter Hoppe promised live music with Christoph Wagner and Lutz Mohwald on Friday and Saturday evenings. Come Saturday evening the atmosphere in Mutter Hoppe was intense. We descended the steps to the basement bar. I heard enthusiastic dining, loud laughter, and live traditional German songs. Mutter Hoppe was packed, and in full swing. I would really love to be able to tell you all about the evening but, in our enthusiasm, we had not booked a table. So, pioneering a first for travel writing, I am going to recommend you visit a place that I wasn’t able to get into, please tell me if it lives up to appearances!

Berlin is closed on a Sunday. Period. Pretty much everywhere is shut. I came to this realisation after spending an hour wandering the desolate city trying to find somewhere for breakfast. I found Wild Matilde’s. The restaurant was not yet open, yet there were a couple of dozen people milling around the door. I believe there is usually something good at the front of any mysterious queue, so I got in line. The décor of Wild Matilde’s is an intense homage to either Moulin Rouge, or Willy Wonka’s Chocolate Factory. Then I got worried. Many of the guests seemed to know one another. I was offered a glass of sparkling wine and was shown to a plump armchair. I was genuinely concerned that I had gate-crashed a private party.

Matilde’s is an all you can eat restaurant in the most literal sense. I would not have been at all surprised if the furnishings were also edible. On my (first) plate: Croissant, roll-mop herrings, a thick slice of pork with apple sauce, curried meatballs, fondant fancies, and chocolate truffles. For breakfast. With alcohol. I love Berlin.

Berlin then threw me a barrage of heavy rain. An all-day downpour soaked through my—supposedly—waterproof coat, then my hoody, and finally my underwear. Word to the wise, never leave your passport in a non-waterproof pocket. I sheltered in the café of the Circus Hostel, home to the David Hasselhoff Museum. The small shrine in the hostel’s basement is worth a visit, if only for a photo-op with a gilt-framed portrait of The Hoff.

I felt a pang of bitterness that I did not indulge such whimsical spontaneity more often, and a regret that I had never experienced staying in a hostel, which—judging by the café—looked a damn fine place to stay. In my youth I was cripplingly shy and lacked the confidence to travel. Instead of a gap-year seeing the world, I wasted two years bunking-off from a college course I had no interest in. That missed opportunity irritated me for more than two decades and became a source of deep frustration others were unable to comprehend. I have been trying to make amends ever since. Sitting with a sodden rucksack, people-watching from the window of a hostel, gave me an uplifting feeling that—just maybe—the ship had not yet sailed. A weekend Berlin city break was the refreshing motivation I needed!

Tom Vaughan-Mountford is an experienced and versatile creative. Tom pursues a varied career as a Video Content Producer, Video Editor, and Designer. He is the Author of Managing a Video Production Company. In addition to pursuing freelance production projects, Tom is also the Senior Video Editor and co-owner of television advertising production company JMS Group in Norwich, UK. You can follow Tom on Twitter @tomontv and Instagram @tomvaughanmountford

Tom is a Television Commercial Director, Editor, Designer, and Author. He is the author of the Focal Press media studies textbook 'Managing a Video Production Company' and is also the Production Director of JMS Group, a television commercial production company in the UK. Outside of the media Tom enjoys sci-fi, gaming, fitness, hiking, and yoga.