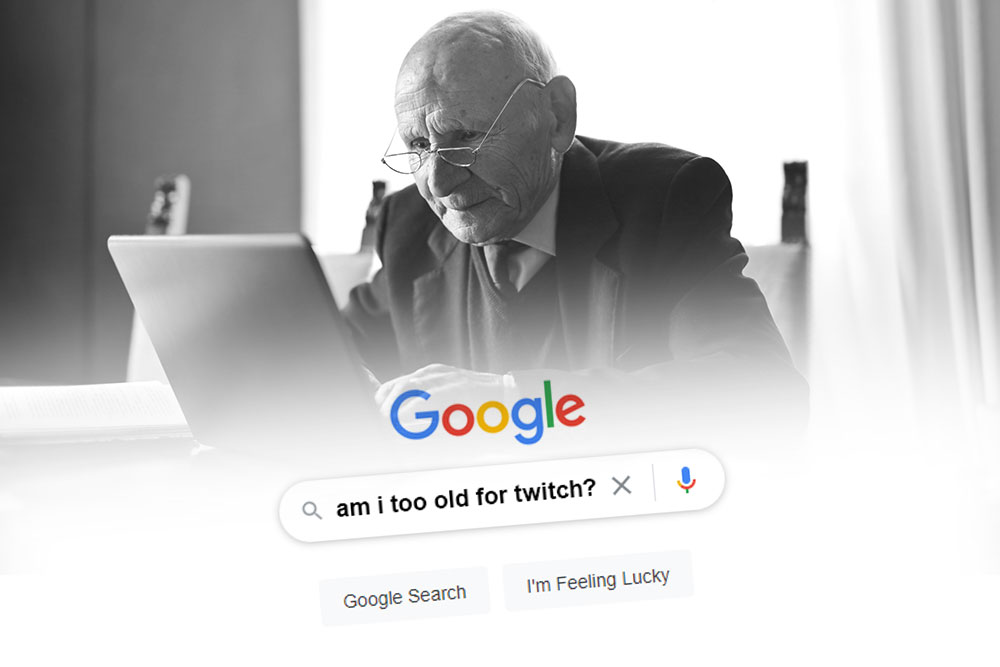 Am I Too Old For Twitch?

Photo by Andrea Piacquadio from Pexels

Am I Too Old For Twitch?

I frequently feel I was born just slightly out of my time. I arrived in the early-eighties, rather than the late-nineties. In demographic terms, this makes me a ‘Millennial’ instead of a ‘Gen Z’. My fortieth year is creeping up on me. No one asks me for ID when I buy alcohol. Although, I was granted a brief reprieve when mandatory facemasks hid my greying stubble. I must have young eyes. Anyway, the impending ‘four-oh’ follows me around like the Grim Reaper. He occasionally leans over my shoulder to whisper in my ear, “Don’t you think those trainers would look a bit tragic on a guy your age?” or “It’s okay, you can check out that word on Urban Dictionary later.”

On occasion, I find myself at the sink scrubbing glass jam jars. After all, it would be a shame to throw decent jam jars in the trash when I could put them in the shed and fill them with rusty screws. Jesus, I thought I was turning into my dad, but no— I am skipping straight ahead to becoming my grandfather! Anyway, I shall set the impending middle-age crisis aside and get back to the embarrassing question in hand: Am I too old for Twitch?

I have a PlayStation, the latest iPhone, I play CoD, and I know plenty about top-end GPU processing power. I can easily converse with someone half my age about those very things, while managing to suppress the dawning realisation that I am—just about—old enough to be their father. If I were to accidentally drop a reference to an N64 or a Megadrive, the twenty-year age difference would crash down like a tonne of bricks.

I installed my first 28Kb/s modem in 1995, and I was trawling the net when most of the population were still only hearing of the wonders awaiting them on ‘the information superhighway’. I kept pace with consumer technology and enjoyed learning about the underlying systems with each iteration of progress. When YouTube arrived, I was—again—more interested by how it functioned rather than entertainment value of the torrent of content flooding into it. And it was this same interest in streaming technology that prompted me to create a Twitch channel in 2019.

In addition—because of my career in video production—I have a long-standing enjoyment of rigging cameras, lights, and greenscreen backdrops. Twitch appealed to all my interests and abilities, regardless of my being far above the average age of users. Hell, I am probably older than most of the Twitch board! From an almost nostalgic perspective, I also recall a time when cutting a live feed of three or four video sources—and overlaying it with moving graphics—couldn’t be achieved without a dozen crew, a vision mixer, and a couple of racks of ancillary gear. So, achieving a similar (if not even better) quality of output with no more than a freely downloadable app like Streamlabs OBS still blows my mind. 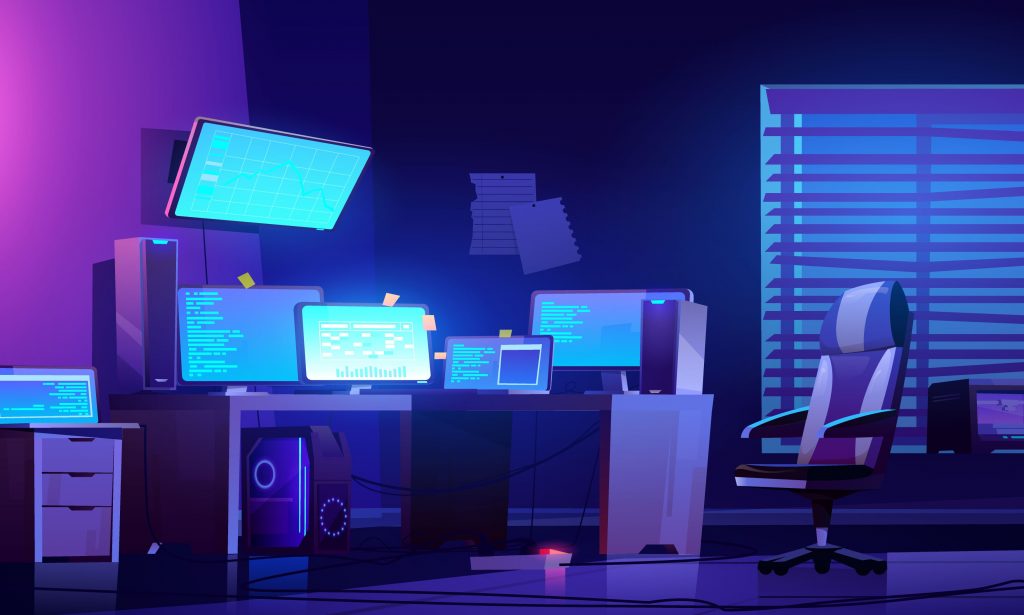 My initial fumbled attempts at Twitch were hampered by system bottlenecks that throttled both gameplay and stream encoding. Lag and dropped frames eventually made it too much of a pain in the ass to attempt both simultaneously. I also soon came to realise I was crap at Fortnite, it just wasn’t a game I was particularly in love with; despite its popularity I simply wouldn’t be able to sustain hours of engaging gameplay. I dropped the gaming and attempted ‘Just Chatting’ streams.

Having a one-sided conversation with a webcam, with the desperate hope someone would join the Chat, is a weird experience. My crowning, and most memorable, achievement was when a student on the other side of the world told me I had a soothing voice, and he had been using me as a study-aid. I gained a handful of followers, and a highly entertaining insight into the language of trolling. After a few months of sporadic streaming I began to flounder, and I had other calls on my time— I put the channel on hiatus.

However, in Spring 2020, the construction of a screaming beast of a PC coincided with the introduction of the UK’s first national lockdown. Thus, I spent several months as a recluse, immersing myself in Call of Duty— emerging the other side with relative proficiency, i.e. good enough for strangers to spectate my gameplay without me wanting to hide my face. I have decided that 2021 will be the year I return to Twitch. I will be 39 years old. So, am I too old for Twitch?

What am I hoping to get out of streaming, second time round? In short, I enjoy creating things for the pleasure of bringing into being something which did not previously exist, the driving force of all human creativity. A viewer’s opinion of a Twitch channel, like any form of entertainment—or art—is going to be entirely subjective; a “Marmite” opinion, as we sometimes say in the UK. Some viewers are going to love it and stick around, while others will hate it and click-away. The rest will loiter merely to troll.

So, while it is important to provide viewers with something that will appeal to them, the underlying reason for becoming a streamer must be an innate inner satisfaction gained from the pursuit of creativity— and that innate pleasure must be strong enough to override all other factors. Would you still enjoy streaming even if just one person were watching? Yes? Great! Do not waste time fretting about whether you’re too old for Twitch, or any other platform for that matter. You cannot influence or change the opinions others may form about your age, or your creations. Know thyself. If you are going to derive enjoyment from something, just go and get on with it!

Lastly—with all that self-assured, unshakeable enjoyment of your craft—don’t exclude the possibility that you might be cool without even knowing it. As Gary Vee has said, “Being cool has nothing to do with age; it has to do with how solid your identity is.” Kalhan Rosenblatt filed an article for NBC in 2019 documenting the popularity of gaming and streaming among people far older than myself. Rosenblatt wrote, “Will, 66, goes by ‘GrndPaGaming’ on the streaming platform Twitch rather than his real name, where he plays a variety of video games, including ‘PlayerUnknown’s Battlegrounds’, a popular online multiplayer shooting game. Wearing black headphones and Aviator reading glasses, he commentates for viewers as he shoots up opposing teams. Will said he has been playing video games since he had to sign out an Apple II computer on Naval Amphibious Base Coronado in the 1970s when he was a Navy diver.”

So, there’s hope for me yet! Maybe I’ll never be too old for Twitch!

Tom Vaughan-Mountford is an experienced and versatile creative. Tom pursues a varied career as a Video Content Producer, Video Editor, and Designer. He is the Author of Managing a Video Production Company. In addition to pursuing freelance production projects, Tom is also the Senior Video Editor and co-owner of television advertising production company JMS Group in Norwich, UK. You can follow Tom on Twitter @tomontv and Instagram @tomvaughanmountford

Tom is a Television Commercial Director, Editor, Designer, and Author. He is the author of the Focal Press media studies textbook 'Managing a Video Production Company' and is also the Production Director of JMS Group, a television commercial production company in the UK. Outside of the media Tom enjoys sci-fi, gaming, fitness, hiking, and yoga.