Motion Design vs Live-Action: The Showdown!

By Tom Vaughan-Mountford28 January 2021No Comments

Motion Design vs Live-Action | Which Is Best for TV Ads?

Should you opt for motion design or a live-action shoot for your next television campaign? Does cost-effective mean less-effective, or less creative?

One of the questions we are often asked by clients at the briefing stage of their TV campaign is “Do you think a filmed advert, or one made with graphics is going to work best?”
First, let’s define ‘graphics’. It’s a broad umbrella that can cover an almost infinite variety of production styles, each with their own level of complexity – and each requiring widely different investments of creation time. For the purposes of most lower-budget TV commercials we can safely assume ‘graphics’ to mean ‘motion graphics’ (mo-graph) – which is the addition of creative movement to otherwise static artwork, logos, images, and text (moving text is sometimes referred to as ‘kinetic typography’). Motion graphics create a sense of ‘animation’, but are not animation in the truest ‘traditional’ sense of the word.
Animation usually refers to creations where every element of every frame has been created for purpose, and it’s a process that is usually far more time-consuming than motion graphics. 3D ‘CGI’ is a different beast that sits somewhere between motion graphics and animation – creating a commercial entirely in CGI can be a very time-consuming process, but many 2D motion-graphics ads incorporate elements designed and rendered in 3D applications.
Long story short: The things you can film in reality are limited, the things you can create with software are infinite.
Semantics dealt with, let’s get back to the question – is it best to produce a TV commercial using filmed live-action footage, or motion design? 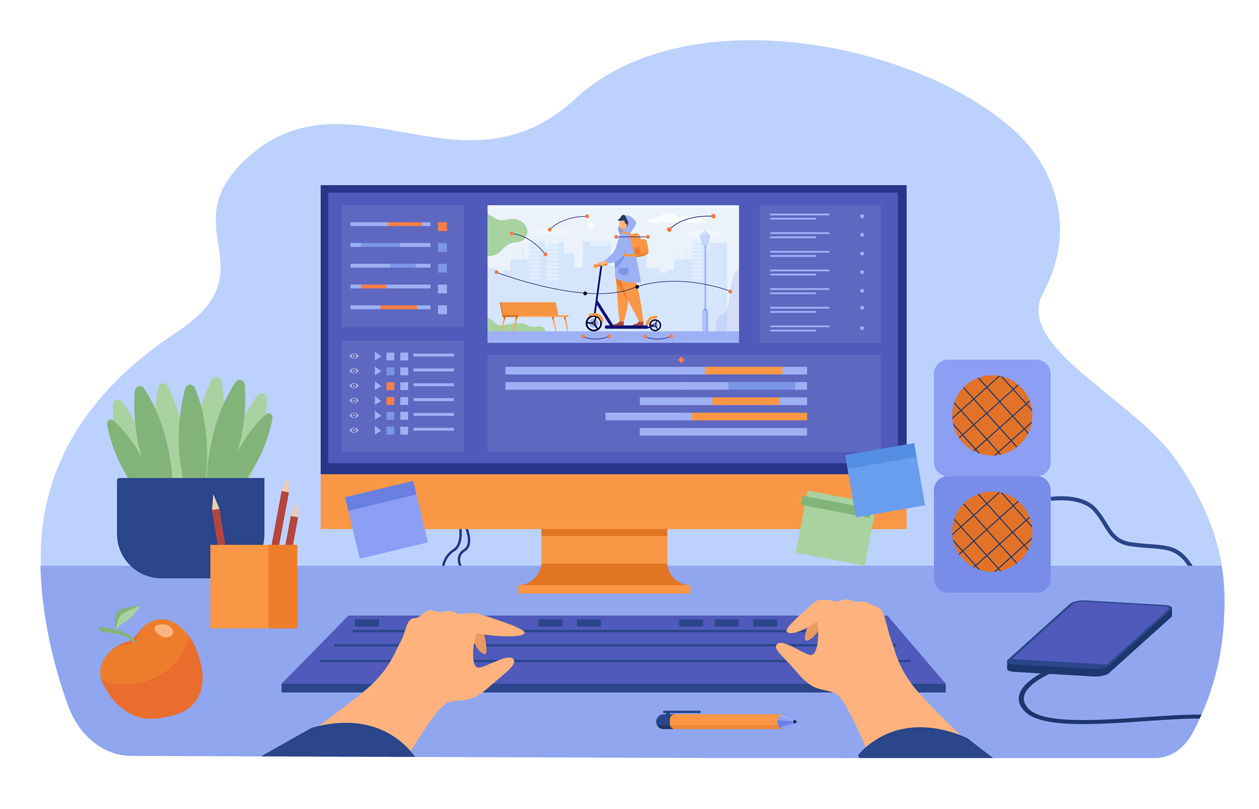 What Are the Objectives of Your Campaign?

If you’re advertising products – where the physical appearance and functionality/efficacy are the key selling points – the case for filming an ad is pretty clear-cut. It’s a no-brainer to shoot a commercial or use CGI renders that are so photorealistic they can be treated as live-action footage. Car commercials show the car –  because an attractive drawing of a car is not what the manufacturer is trying to sell! Viewers want to see what it is you’re trying to tempt them to purchase.
If you’re going to be advertising a service – something altogether more conceptual – then you’re trying to get a viewer to appreciate how an offering would be beneficial to them. And, as there isn’t a physical ‘thing’ to point a camera at, the options for the advertising creative are essentially limitless.

Are Graphics as Effective as Live-Action?

Way back in the past, graphics were indeed the poor relation to live-action footage. Big advertisers spent big money on big film shoots. Little advertisers pointed a video camera at printed artwork. The difference was starkly visible, ‘live-action vs graphics’ was what separated local advertisers from the big boys. Roll forward a few decades and motion-graphics for TV are now an artform that’s not to be dismissed. Graphics-based commercials can more easily explain abstract concepts and processes, can be easily tied to wider brand strategy, and can be just as emotive as filmed commercials. On a practical level, graphics ads can be produced within days – even within hours if absolutely necessary.
Graphics also provide flexibility for campaigns likely to require future changes to their messaging. Shooting storyboarded footage to fit a pre-written script can ‘set in stone’ many elements of a commercial, which can sometimes limit options for future adjustments – or at least require compromises to be made. However, every element of a motion-graphics commercial can be altered at relatively short notice.
So, there are plenty of practical reasons why major national and international brands use motion-graphics commercials, either as the keystone of a campaign or as supporting sales messages to run alongside a live-action brand commercial – but what about their effectiveness?

We are lucky to have a client who couldn’t decide whether to make their TV debut with a filmed commercial or a graphics commercial. There was a feeling that a presenter-led commercial might better solidify the reputation of the brand, to put a face to the name. But… a graphics-led commercial might better demonstrate the benefits of the product. So, they did both. Gotta love clients with such a gung-ho can-do attitude! We produced a live-action and a graphics commercial, and the client  A/B tested the two ads in parallel. Two weeks into the campaign, the client shelved the live-action commercial and substituted the remaining airtime to broadcast the graphics commercial alone. The cheaper (sorry, more ‘cost-effective’) graphics commercial had prompted a better response than the presenter-led version.
Objectively, the graphics ad didn’t have the same ‘razzle dazzle’ as its live-action brand-led compadre, but the straightforward explanatory creative of graphics were perhaps able to convey the benefits with more clarity. Of course, that’s just a single anecdotal example – the majority of commercials on air are filmed as live-action, and are – by and large – exceptionally effective. If the budget allows, a shoot is always worth considering. But, when choosing between multiple creative approaches there are no grounds to regard a graphics commercial in any way the lesser of the options. Choosing graphics can also be a canny strategic move for new advertisers looking for immediate impact, or for experimenting with multiple versions of campaign creative. Graphics aren’t necessarily always produced for smaller budgets, but there is the potential for a lower investment in production, and those savings can be used to allocate more of the campaign budget to airtime or viewer impressions, and so gain additional exposure for the commercial.

This article was originally published on the blog of JMS Group, a long-established TV commercial production company in Norwich, UK. JMS Group specialises in the production of television campaigns for first-time advertisers, they have tremendous experience of high-end motion design for TV.

Tom Vaughan-Mountford pursues a varied career as a Video Content Producer, Video Editor, and Writer. He is the Author of Managing a Video Production Company. You can follow Tom on Twitter @tomontv and Instagram @tomvaughanmountford

Tom has a diverse career as a Content Producer, Video Editor, and Designer. He is the author of academic textbook 'Managing a Video Production Company' and is also the co-owner of a TV advertising business in the UK. Outside work Tom enjoys sci-fi, gaming, and fitness.